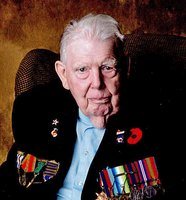 MacDONALD, George Randy, UE, Veteran WWII, Canadian Coast Guard (Captain, Ret): At Carveth Care Centre in Gananoque on Thursday, November 16 at the age of 95 years. Born in Rockport, ON, eldest son of the late Verny and Helena (Slate) MacDonald. Also predeceased by his cherished wife Lelia "Lee" (Potts) RN; dear companion Violet Kernell; much loved brothers and sister Alfred, Jack, and Roberta. George's early life was spent exploring the St. Lawrence River and the countryside surrounding Rockport and Mallorytown where his UEL soldier ancestors had settled following the American Revolution (1783). In 1940, he enlisted into the RCNVR and served throughout the war as a gunner aboard patrol vessel HMCS Chaleur, corvette HMCS The Pas and destroyer HMCS Huron. His five year tour included convoy escorts across the North Atlantic to the UK and four runs into the Arctic to Murmansk and Archangel, USSR. George also participated in North Sea, Channel and Bay of Biscay intercepts, D-Day operations and life-saving rescues of friend and foe. After the war, George worked briefly at Hex Baits Limited in Brockville and then at Snider Boat Lines as a licensed Thousand Islands tour boat guide. He was later hired by marine shipping companies to pilot vessels throughout the St. Lawrence Seaway and waterways of northern Alberta and the NWT. He eventually joined the Canadian Coast Guard and retired in 1982 while stationed in Trenton with Search & Rescue. George was an accomplished artist, a gifted carver and mentor to many. His decoys and decorative birds received several international "Best of Show" and first-place ribbons. For many years George and Lee operated "Quick & Quack Bird Carvers" as a hobby enterprise. In his later years, George worked tirelessly to establish the Memorial & Decorations Wall at the Royal Canadian Legion Branch 484 in Mallorytown where he was a Life Member. Their reception hall is named in his honour. In addition, he was a Life Member of Macoy Masonic Lodge 242, the Marine Museum of the Great Lakes and a member of the Mallorytown United Church. George will be lovingly remembered by sisters Verna Donnelly also of Carveth, Patricia and brother-in-law Arnold Warren of Brockville, and many nieces, nephews, cousins and close friends throughout Canada and the USA. Family and friends may pay their respects at the Barclay Funeral Home, 1033 Prince Street, Lansdowne on Sunday from 6 - 8 p.m. The Celebration of Life will be held on Monday November 20, 2017 at 2 p.m. with Rev. A. Rose Officiating. Cremation to follow, burial alongside his beloved Lee at a later date in Mount Pleasant United Church Cemetery near Stirling, ON. In memory of George, donations to the Mallorytown Legion would be gratefully acknowledged. Royal Canadian Legion Branch 484 Mallorytown will hold a Memorial Service Sunday evening at 5:45 p.m. followed by Macoy Masonic Lodge A.F. & A.M. at 6 p.m. all sister Lodges are invited to attend. Messages of condolence may be sent online at www.barclayfuneralhome.com.