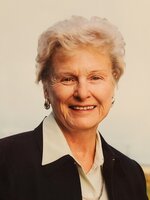 Peacefully entered into rest with her family by her side at the Brockville General Hospital on Wednesday August 25th, 2021. Barbara LeSueur (Voight) formerly of Port Hope, aged 91 years. Beloved wife of the late Richard V. LeSueur (June 30th, 2021). Loving mother of Linda Darragh (Alex) of Evanston, IL.; Rev. Richard LeSueur (Rhonde Gerhart) of Canmore, AL; David LeSueur (Rebecca Phillips) of Brockville; and Anne Pye (Michael) of Maui, HI. Cherished grandmother of Christopher Darragh (Paula), Jeff Darragh and Hillary Sutton (Bill); Jamie LeSueur (Corrie) and Philip LeSueur; William, Thomas and Sarah Pye; Cameron LeSueur (Marta) and Trevor LeSueur; and two step grandchildren Mallory and Jude Phillips; and great grandmother of three. From an early age, she enjoyed sewing and embroidering. She was a graduate of Wellesley College, a life member and president of the Embroiderers Association of Canada and was the founding president of the Toronto Guild of Stitchery. As a devoted Christian, she was active in the ecumenical midweek Sunday School at Moore Park/Rosedale, was a board member of Rosedale United Church and later a warden of St. Paul’s Perrytown, Port Hope. She served as a volunteer in many capacities, among which was the Vancouver Aquarium, the orchid greenhouses in Selby Gardens, Sarasota, FL., and earlier in a transition house for released women prisoners in Toronto. A private Memorial Service for both Barbara and Richard will occur at Trinity College School chapel in Port Hope. Arrangements entrusted to Barclay Funeral Home, 137 Pearl Street East Brockville. Messages of condolences may be made online at www.barclayfuneralhome.com.