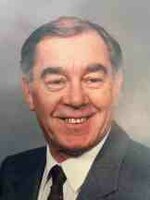 Charles "Chuck" McCourt passed away peacefully at Kingston General Hospital on February 3. He was 88 years of age. A long-time resident of Brockville, Chuck was born on July 23, 1933 to Mary and Lloyd McCourt. He was raised in Cornwall and attended Cornwall Collegiate Institute. He married Constance Loucks on July 23, 1955. Chuck was a well-loved and respected employee at Braden Ford and Riverside Ford for many decades, where he provided leadership and oversight to the Parts Department. An ardent lover of cars, he enjoyed driving and restoring, and following retirement could be found many weekends attending car shows with his beloved cherry red Mustang. His love of all things fast began as a boy, and as a teen he began racing BSA motorcycles. In 1955 and 1956 he was the Canadian National Dirt Track Champion. Chuck was a passionate lover of sports. Over the years he was a consistent fixture at local arenas where he was an avid supporter and the consummate fan. He volunteered and coached minor hockey as well as local youth baseball. He was a member and played golf regularly at Highland Golf Club for many years. He is survived by his wife of 66 years, Connie of Brockville, and by his sons David (Tracy) of Conquerall Bank, NS, Michael (Julie) of St. Catherines, daughters Joanne Cole (Randy) of Sacramento, CA and Carey Kachilo (Ryan) of Asheville, North Carolina. He is also survived by ten grandchildren, Natasha Cook (Chris), Caleb Cole (Chrissy), Luke Cole (Tatiana), Brittan Cole Lajeunesse (Jason), Caitland Seymour (Grant), Keagan Cecil (Bill), Riley McCourt, Lucas Kachilo, Camden Kachilo, and Ella McCourt. He is also survived by seven great-grandchildren as well extended family members. A celebration of life will be held Summer of 2022. Barclay Funeral Home, 137 Pearl St. East Brockville entrusted with the arrangements. Memorial donations in memory of Chuck may be made to Brockville Minor Hockey Association, Brockville District Hospital Foundation Palliative Care Services, and Highway Pentecostal Church.