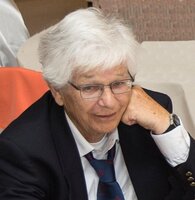 It is with great sadness that we announce the peaceful passing of Michael Summers on Tuesday February 8, 2022 at the Brockville General Hospital at the age of 79. Sadly missed by his children, Craig (Cheryl) Summers of Prescott and Sandra McNamara (Don Green) of Oxford Station. Cherished “Grandpa” of Kristina (Bradley) Crook and Alison (Michael) Ladouceur and Great Grandpa to Cohen & Riley Crook. Former husband of Ruth Garrett of Kemptville. Dear brother of Keith Summers of Mississauga and Diane (Bob) McGill of Perth. Pre-deceased by his parents, Elmer and Bertha (nee Oakes) Summers and his sister Beverley (Richard) Harris. “Mike” was raised in Burlington, and London and went on to study electronic technology at Western University and Ryerson Polytechnic University in Toronto. He moved his family to the Brockville area to join Dupont Canada in 1966 and settled outside Prescott where he lived his life. His career spanned more than 30 years as an engineer for then Automatic Electric (Brock Telecom), retiring in 1999. A private but intelligent man, had a love of wood working, classic cars, and dabbled in racing post retirement. He will always be fondly remembered for the love of his family, his sound financial advice, and his “fun-spirited” political debates. At this time, the family wishes to hold a private time of remembrance. In memory of Michael, donations to Wellington House in Prescott, or the Alzheimer’s Society of Lanark, Leeds and Grenville would be greatly appreciated by the family. Arrangements entrusted to Barclay Funeral Home, 137 Pearl Street E., Brockville. Messages of condolence may be sent online at www.barclayfuneralhome.com.