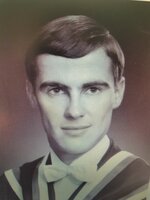 Known as 'Coach' to many in Brockville, passed away on February 25 aged 78 years at St. Lawrence Lodge. Bevin was born in St. Thomas, Ontario on February 4, 1944, and is survived by his son Jamie (Toronto), his sister Barbara Tuff (St. Thomas) and brothers Bob (Philadelphia) and Bill (Toronto) and many nieces and nephews. He was predeceased by his beloved four-year-old daughter Brooke and his younger brother Barry. Bev was a natural athlete and played basketball and football for his high school. He also enjoyed baseball and golf during the summer. Bevin earned a B.P.H.E. degree from Queen's University where he played basketball and football for the Golden Gaels intercollegiate teams. From 1968 to 1985, Bevin taught physical education and science at Thousand Islands Secondary School in Brockville. During that time at TISS, he coached football and basketball teams which won seven league football championships and one Eastern Ontario basketball championship. In January 1985 his world changed when he was felled by a near fatal bout of pneumococcal meningitis. That unfortunate event left Bevin with some impairments which rendered him no longer competitively employable. In retirement he was consistently unwilling to leave Brockville and opted to live independently for as long as possible. In Brockville, he served as an ardent supporter of the Maple Leafs and Blue Jays at all times. After a short stay at Wedgewood Retirement Residence, Bevin moved into St. Lawrence Lodge in August 2019. His family extends their deep appreciation to the many residents of Brockville who supported and assisted 'Coach' during his years in your city. Your care and consideration made his life here in retirement possible. We wish to thank St. Lawrence Lodge and most sincerely Jodi Hutchins, his caregiver extaordinaire for the past several years. He/we could not have done this without Jodi. Cremation has taken place and his remains will be interred with other family members in Cowal Cemetery, West Elgin. A celebration of Bevin's life will be held on March 26, 2022 from 1 - 4pm at Broad St. Billards, 51 King St., W., Brockville, ON. Donations are welcome to a charity of your choice. Arrangements entrusted to Barclay Funeral Home Ltd., 137 Pearl St. East, Brockville, ON. Messages of condolence and donations may be sent online at www.barclayfuneralhome.com.