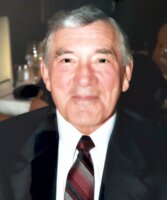 Pat passed away peacefully at Brockville General Hospital with his sons by his side on Wednesday March 16th, 2022 in his 84th year. Predeceased by his wife, Joan (2021) of 57 years and his parents Joe and Ida Brophy (Sylvestre) from Pembroke, by Joe’s second wife Grace, and Pat’s sister Barb from Ottawa. Survived by beloved siblings Brian in Perth, Gwenda in Victoria, and Jayne in Pembroke. Cherished father to Paul (Carole) and Joe (Lynne), and treasured grandfather to Emily, Benjamin, Luke, and Samantha. Pat will also be remembered fondly by many nieces, nephews, and new and old friends alike. Pat was born in Smith Falls ON and moved to Pembroke ON at the age of 15 where he worked with his father at the family furniture store. He met the love of his life, Joan, in high school in Pembroke. Pat was a successful hockey player playing for the Pembroke Little Lumber Kings (ODHA champion 1958), earning a full hockey scholarship at Clarkson College in Potsdam New York, and was named to the 1963 All American hockey team. Immediately after his college playing days, he played with the Kemptville Prescott Combines SR Hockey team helping them to a quarter final finish in the 1963 Allen Cup. This led to the team being inducted into the Kemptville and District Sports Hall of Fame (2017). Pat enjoyed a tremendous teaching and coaching career culminating at South Carleton High School in Richmond, ON where he coached the 1977 boy’s All-Ontario championship hockey team. This team was inducted into the Goulbourn Sports Wall of Fame (1999). Pat and Joan enjoyed an adventurous retirement life living by the lake, travelling the world, and spending winters in Florida. A joint Celebration of Pat and Joan’s life will be held at a later date. In memory of Pat, donations to the Heart and Stroke Foundation would be gratefully appreciated by his family. Arrangements entrusted to Barclay Funeral Home, 137 Pearl Street East Brockville. Messages of condolences may be made online at www.barclayfuneralhome.com.