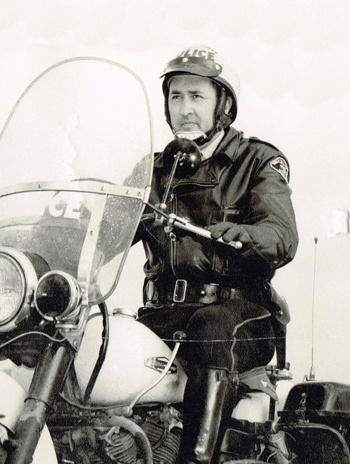 Retired Sergeant Brockville Police Services In the final hour of Wednesday, April 14, 2022, at 89 years young, Russ Mack, aka Rusty the Motorcycling-Cowboy-Policeman passed peacefully, at Wedgewood retirement residence with his son Dallas at his side. Russ was predeceased by his parents Willis and Cora (Smith) Mack, brothers Gord and Larry Mack and a sister Lenora Barkley and leaves behind her sister Norma McFadden (Ray) and brother Ron Mack (Frances) along with a host of cousins, brothers and sisters-in-laws and nieces and nephews. Russ was born in Edmonton on October 11, 1932. His family moved to Ontario in his teenage years. They eventually settled in Brockville where his father Willis Mack helped to build and pastor the Wesleyan Church. Russ worked at Phillips Cables where he met the love of his life, the late Joan Gemmell. He was soon hired with Brockville Police where he proudly served his community from 1963 to 1993 and retired as a Sergeant. During his career, he rode the Police Motorcycle for 11 years but was always an avid motorcyclist owning Harley’s and Hondas and riding until he was 88 years young! Alongside Joan, Russ raised three boys, Cameron, Dallas, Jason, and happily gained 3 daughters-in-law; Jackie, Kelly and Melissa. They were further blessed with 3 grandchildren; Avery, Emmett and Bryce. Active in his community through church involvement, coaching baseball and hockey (Police Athletic Association), a member of Brockville Police Chorus, and in later years participating in singing groups with friends including with his Young at Heart group and singing at retirement residences and for palliative care patients. Through his mentoring as a police officer, a coach or a parent to more then just his children, through his genuine kindness and friendship, his absolute faith, honest and sincere nature and through love, laughter and song Russ left a deep and lasting impact on all that came into his life. Now he leaves us all, as he rides off into the sunset for the last time, like any cowboy hero should. Family will receive friends at the Barclay Funeral Home, 137 Pearl St. E., Brockville on Monday, April 25th, 2022 from 11:00 a.m. until the time of Service which will be held in the Chapel at 1:00 p.m. Interment to follow immediately after the Service at Roselawn Memorial Gardens. In memory of Russ, donations to C.N.I.B. or the Heart and Stroke Foundation would be gratefully acknowledged by the family. Messages of condolence may be sent on line at www.barclayfuneralhome.com If you wish to Live Stream the Funeral Service, please use the tab on the left hand side "Live Stream of Funeral Service" to do so.