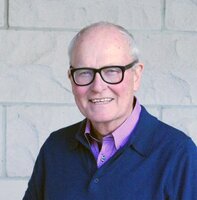 GRAHAM, Andrew Bryan July 16, 1947 – April 18, 2022 Andrew Graham (Andy) died peacefully in the way he wanted at his long-time home, Locust Grove Farm in Mitchellville (Lansdowne) Ontario. He leaves his wife of 52 years, Katherine Athol Hamilton Graham, his daughter Katherine Lindsay Hamilton Graham (Joshua Boland), his sister, Gail MacFarlane and extended family in Ottawa, Port Carling, Victoria, Kelowna, Toronto and Florida. Andy was a member of the first graduating class of Glendon College. Following graduate work at the University of Toronto he began a very successful career as a public servant, notably with the Correctional Service of Canada and Agriculture Canada. Upon his first retirement, he began a 20-year second career as a faculty member in the School of Policy Studies at Queen’s. Andy loved teaching and interacting with students and colleagues, both at Queen’s and in the broader public policy and administration community. He had a long and rewarding role with the Canadian Association of Police Governance and with the Institute of Public Administration of Canada. Andy lived most of his life on the farm which defined him in many important ways. He also had a long love affair with Charleston Lake and took a great deal of pride in stewardship of the cottage on Dickson’s Bay. He volunteered actively in his community, serving on the boards of the Frontenac Arch Biosphere, the Friends of Charleston Lake and the St. Lawrence District Medical Centre. His family would like to thank all of the healthcare professionals who cared for Andy over the past two years. Special thanks to all of the staff at the St. Lawrence District Medical Centre, especially Phoebe Collard, RNP. You exemplify the best in community care. At Andy’s request, there will be no service. His ashes will be scattered on the farm. If you wish to remember Andy, please consider a donation to the St. Lawrence District Medical Centre, Box 39, Lansdowne ON., K0E 1L0 or www.stlawrencedistrictmedicalcentre.com. He will be missed terribly but remembered well. Arrangements entrusted to the Barclay Funeral Home, 1033 Prince St., Lansdowne, ON, 613-659-2127. Messages of condolence may be made online at www.barclayfuneralhome.com.