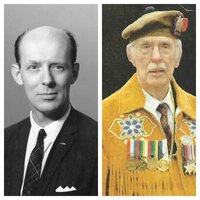 “Many thanks to everyone who wrote comments on my father’s obituary at the Barclay Funeral Home. He would be very touched by your kind words (and remembrances) and they mean a lot to me as well. I would hope to re-connect with many of you sometime in the future, now that I’m living in this area.” Fowler, Donald – Passed away peacefully at the Brockville General Hospital on April 22, 2022 at the age of 96 years. He was born in Peterborough to Herbert and Grace Fowler, as one of four children including Lorraine, Karl and Gerald, who are all deceased. During their early years the family moved to Kingston and Donn attended primary school in that city. However, his education was interrupted by the war effort, having entered military service in 1939. Serving as a member of the Stormont, Dundas & Glengarry (SD&G) Highlanders he participated in several different assignments until returning to Canada in 1945… eventually settling in Brockville. Donn continued with his education in Brockville, at the military (outpost) for returning service personnel and completed his schooling by 1946. Later that year, he met Eva Hynes (from Brockville) and they were married in 1949. They had one child (Malcolm) and eventually settled into the Britannia Heights area where they lived for over sixty years. In 1948, Donn joined the management team at GTE – Automatic Electric, as part of a “spin-off” unit from Phillip’s Cables and spent the rest of his thirty-year career there, taking early retirement in 1977. During his retirement years he took on other responsibilities, including working for the Ontario Film Review Board along with active participation in the local Progressive Conservative Association. Throughout his life in Brockville, Donn was involved with many local organizations and their activities, including the… Operatic Society, Brockville Flying Club, Kiwanis Club, Leeds-Grenville Historical society, Royal Canadian Legion and many others. Additionally, there were equestrian interests which carried over from his early years and from war-time service. He also took advanced education courses at Queens University and had developed a life-long interest in genealogy; one in which he traced his family roots back to Scotland along with connections to the Metis Nation. Hopefully Donn Fowler will be remembered, by his friends and colleagues, as a man of service… to his country, his community and his family and friends. May he now rest in peace. As per his wishes, a private family service has been arranged. In memory of Donn, donations to Wounded Warriors Canada would be gratefully acknowledged by the family. Condolences and memories may be forwarded (by mail) to the Barclay Funeral Home, 137 Pearl St., E., Brockville, Ontario or online through: www.barclayfuneralhome.com Special thanks are extended to the staff at The Wedgewood in Brockville and to Veteran’s Affairs Canada for their on-going support of WWII veterans.