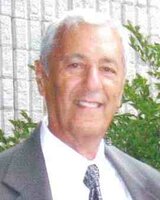 AN OBITUARY IN HIS OWN WORDS

Larry (Lawrence) Faris was born on the corner of Finlayson and Wiley Street diagonally opposite from Zanette’s grocery store in Fort William (now called Thunder Bay or as his Uncle Fred called it—Blunder Bay) on October 11, 1936, ten minutes before his younger brother Eugene and 3 years after their older brother Albert. His parents (deceased) were Albert Faris and Margaret Asseff.

In elementary school he excelled in marble paying and receiving the strap. In high school he led St. Pats to its first championship (basketball) ever. However, his first love was winning snooker games at the Top Hat Pool Room. In university at Lakehead Tech (now Lakehead University) and, later at Queen’s, his ping pong skills were honed. He emerged onto the work scene with a chemical engineering degree—an amazing feat since he had no skill in the field. He tested these waters in Thedford Mines, PQ, and, Quebec City, at a paper mill where he developed into a pretty fair beer consumer.

In 1961, he moved to Cornwall, ON to begin his teaching career. There he met his wife, Dawn Ann, (neé Grant) and together they produced two beautiful daughters- Karen (Mark Haldeman) and Brenda (Guy Larocque). In 1966, after tiring of sucking in sulphur dioxide fumes, he moved the family to Brockville ON to teach at Thousand Islands Secondary School until his retirement in 1994. He joined the Kinsmen Club in Cornwall and continued in Kin on coming to Brockville. It was here that he learned his true talent lay in playing poker. When he became too old to be a Kinsman, he moved his game over to the Brockville Club where he improved his standard of living greatly. He was also a member of the Brockville Country Club where he was told that his swing was just as bad today as it was 40 years ago.

In his retirement years, his physical and mental skills improved greatly. His talent as a bridge player was legendary—along with his ability to wash dishes. However, the biggest drawback in his life was threefold:

P.S. He wants everyone to know he had a happy life.

The family wishes to acknowledge the exceptional interest Dr. Hynd and Dr. Fuoco took in Larry’s health which allowed his last year to be led with dignity.

Donations can be made to the Brockville Food Bank.

A Private interment will be held. In memory of Larry and in lieu of flowers, donations to the Brockville and Area Food Bank would be gratefully acknowledged by the family. Arrangements entrusted to the Barclay Funeral Home, 137 Pearl Street East, Brockville. Messages of Condolence may be sent online at www.barclayfuneralhome.com.