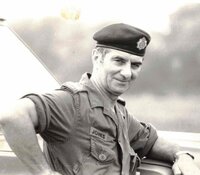 Entered into rest at Kingston General Hospital on Wednesday October 12, 2022. Major Henry “Hank” Walter Jones of Lansdowne age 93 years. Beloved husband and best friend of the late Knarig “Kay” Jones. Cherished father of Henry Jones Jr. Hank was an infantry soldier and a Korean War Veteran. His wife and family were the most important things in his life.

Service for Henry will be held at the Barclay Funeral Home, 1033 Prince Street Lansdowne on Saturday October 22nd, 2022 at 2:00 p.m. Interment will follow at Union Cemetery. In memory of Hank, donations to the Salvation Army would be gratefully acknowledged by the family.