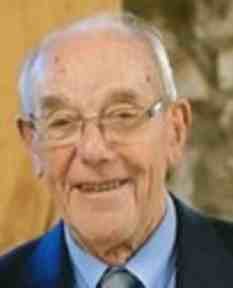 On June 2, 2019 at St. Lawrence Lodge in Brockville, Ontario, our father passed peacefully. Born on August 26, 1925, Dad was raised in Scotland, and grew up in the beautiful area of Aboyne, Aberdeenshire.Dad joined the Royal Air Force and was training as a flight engineer when the war ended. He was mustered into the army and sent to the Suez Canal as a peacekeeper. Following his discharge, Dad headed for Australia. On the way, he stopped in Toronto to visit his brother, Peter. He never made it to Australia; Peter was boarding at the home of Dad’s future wife and our mother, Rosemary.In 1951, he married Rosemary Thomas (Mom) and together they raised Bill, David and Shirley in Rexdale and later Barrie, Ontario.

Mom passed away after a long battle with cancer in 1983. Dad subsequently met Jean Cull and together they moved to the village of Alban, Ontario where they built their dream home on the French River. Dad and Jean enjoyed over 20 years in their home as active members of the community, making many lasting memories with family and friends. Dad lost his second partner in life when Jean passed away from cancer in 2013.Prior to his retirement up North in 1989, Dad enjoyed a successful career in Canada. After training as a diesel mechanic in the army, he obtained work as a Machinist at Campbell’s’ Soup in Toronto, followed by a position at Orenda Engines with the famous Avro Arrow program. He moved on to Tambrands in Barrie, where he spent the rest of his career as a Machinist, Production Manager, Materials Manager and Plant Engineer.

Personally, Dad was a kind and gentle man, a terrific father and teacher to his children and grandchildren. He led by example, not by harsh words. He was generous and good-humoured. He loved visits from family and doted on his grandchildren. He was also a golfer, camper, darts champ, fisherman, motorcyclist, boater, snowmobiler, sports car enthusiast, machinist,4x4 rider, builder, winemaker and co-pilot. His skill was in his hands. It seemed he could build anything or fix anything.  He had perseverance and endless patience. If he turned his hand to something it was always done right.

Dad’s final resting place is with Jean at the Alban Cemetery.

A Celebration of Life will be held at Barclay’s Funeral Home, Brockville on July 2nd, 2019 from 2:00 – 4:00 pm. Dad loved nothing more than a family gathering, and as such, everyone is welcome to join the family at 32 Cedar Street in Maitland following the Celebration.

In lieu of flowers, donations to the Canadian Cancer Society or St. Lawrence Lodge are appreciated.

We miss you, Dad. Rest in peace.