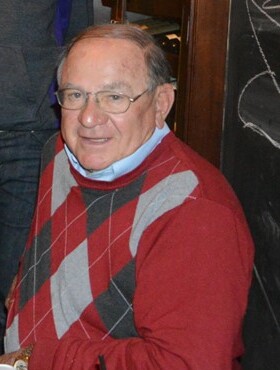 On December 25th , 2022, Gerald ( Gerry) Henry Huck, beloved husband and father of three, passed away at age 84 at the Brockville General Hospital with family by his side.

For those of us who knew and loved Gerry… know that right now he is talking to St Peter, telling him that although Heaven seems nice, he has just left his own paradise. As he describes the attributes of The Thousand Islands and Rockport in particular, he’ll ask if “anyone” has thought about moving Heaven there.

He was the fourth son born to Edward and Cassie Huck on Oct 3, 1938 in Rockport. He attended Rockport Public School before moving on to Gananoque High School. What he lacked in formal education he made up for in street smarts and a strong work

ethic. Gerry met the love of his life, Rebecca ( Becky) Wolos when Becky’s family would travel from New Jersey to Scenic Lodge ( owned by the Huck family) in the summer.

For over 40 years, Gerry along with his brother Morris operated Ed Huck Marine.

He would consistently log 50-60 hour work weeks, not only to make life better for his family, but because he loved it. He had a keen interest and was a quick study of anything pertaining to the marine industry. In 2009 , He was inducted into the Canadian Boating Hall of Fame for his contributions to the industry. Gerry always believed that tourism was the area's greatest resource and he volunteered in endeavours that furthered that belief. Efforts included the St Lawrence Parks Commission (the group that made the 1000 Islands Parkway bike path a reality), Ontario Gaming Commission (bringing the Casino to Gananoque) as well as The International Council (a cross border initiative). He was also a member of the Macoy Lodge.

After retiring at 58, he and Becky spent their winters in Florida and always home to the Thousand Islands in the summer. Gerry took it upon himself to be an (unofficial) ambassador for the area. The family was never surprised if they were in New York City, Florida or Acapulco and he met someone he had known somehow.

Gerry was a character whose life could be written into a book based on the places he went and the people he met. He shook JFK’s hand days before JFK went to Dallas, he saw the first Space Shuttle Land in the desert, and he and Becky formally met Queen Elizabeth II. He had a passion for hockey and loved watching Hockey Night in Canada with his faithful dog Max.

Gerry’s greatest source of pride came from his family. He will be greatly missed by his loving wife of 58 years Rebecca (Becky) , his “girls” Jody ( Peter) Johnston, Laura Orr and Heather (Scott) MacCrimmon. Grandchildren Cicely( Graham ) Dickson, Sam (Kait) Johnston, Jack MacCrimmon, Hannah ( Elijah Woods) MacCrimmon and Charlotte Orr will all miss their beloved Poppy Huck. Great grandchildren Charles Dickson and Andie Johnston will someday understand how special it was to have met him. He also leaves behind his brother Morris ( Joyce) Huck, sister Beverly Sutton, Brother in law Edward ( Betty) Wolos and sister in law Ginny Wolos as well as many nieces and nephews.

He was predeceased by his parents Edward and Cassie , brothers Donald and Robert, mother and father in law Emil and Elfrieda Gavel, brothers in law Keith Wolos , Nelson Sutton and nephew Edward Huck.

There will be an empty seat at PRB meetings in which Gerry and contemporaries weekly solved Canada’s Problems ( if only someone would have asked them).

A Special thank you to Joan Simon (BGH foundation), all of the Palliative Care team, especially Dr Ashe and Dr Thomas, nursing team Joan, Charlene, Shannon, Jocelyn, Brianna, Alex and Boyd, who all took extra time with and assisted the family when needed. The team’s capacity for compassion is truly remarkable and as a community we are blessed to have these services available.

A Celebration of Life service will be held in the summer. In lieu of flowers, a donation in Gerry’s memory to the Brockville and District Hospital Foundation/Palliative Care would be greatly appreciated.

A Memorial Tree was planted for Gerald 'Gerry'
We are deeply sorry for your loss ~ the staff at Barclay Funeral Home - Brockville
Join in honoring their life - plant a memorial tree
Share Your Memory of
Gerald 'Gerry'
Upload Your Memory View All Memories
Be the first to upload a memory!
Share A Memory
Plant a Tree